According to Chinese astrology, each year (starting from Chinese New Year) is associated with an animal sign, occurring in a 12-year cycle. For example 2015 is a year of the Goat. 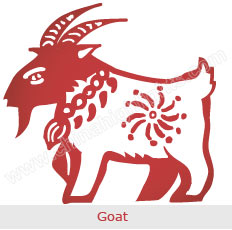 Chinese New Year 2015 will begin the latest Year of the Goat. Decorations will reflect this and Goat sign people will take special care about what they do

Choose your date of birth and find out about your Chinese zodiac sign.

People born in a year of the Goat are generally believed to be gentle mild-mannered, shy, stable, sympathetic, amicable, and brimming with a strong sense of kindheartedness and justice.

They have very delicate thoughts, strong creativity, and perseverance, and acquire professional skills well. Although they look gentle on the surface, they are tough on the inside, always insisting on their own opinions in their minds. They have strong inner resilience and excellent defensive instincts.

Though they prefer to be in groups, they do not want to be the center of attention. They are reserved and quiet, most likely because they like spending much time in their thoughts. Goats like to spend money on fashionable things that give them a first class appearance. Although goats enjoy spending money on the finer things in life, they are not snobbish.

People born in a year of the Goat are very serene and calm. Therefore they tend to have fewer health problems.

If goat people are in mental and emotional good spirits, this should have a positive effect on their physical health. Eating fresh and organic produce, and eliminating red meat from their diet when possible, is an effective way to keep healthy. They should get out among nature and commune with the great outdoors. Fresh air, trees, and sunshine will all do wonders for their health. Goat people should have a regular schedule for meals and keep their sleep and waking times consistent.

The Best Jobs or Career for Goats

People born in the year of the goat prefer to work in a team. Their best work partners are Horses. They are not crazy about status and power. Unless asked, they won’t ever volunteer for anything and act as leaders. Good career choices for goats are pediatrician, actor, daycare teacher, interior designer, florist, hair stylist, musician, editor, illustrator, and art history teacher.

How to Build Relationships with “Goat People”

Generally speaking, Goats are private. Therefore it may take time and effort to get to know those who are born in a year of the Goat. Goats seldom share their personal lives. This is the reason why most Goats have few intimate friends. Once they become friends, their friendship is peaceful and fulfilling. They work hard for those they love.

The Luckiest Things for “Goats”

According to Chinese astrology, each animal zodiac has its own lucky numbers, lucky days, lucky colors, lucky flowers, and a best direction. Here are the Goat’s:

Things that Should be Avoided by Goats

These things are believed to be unlucky for Goat people. 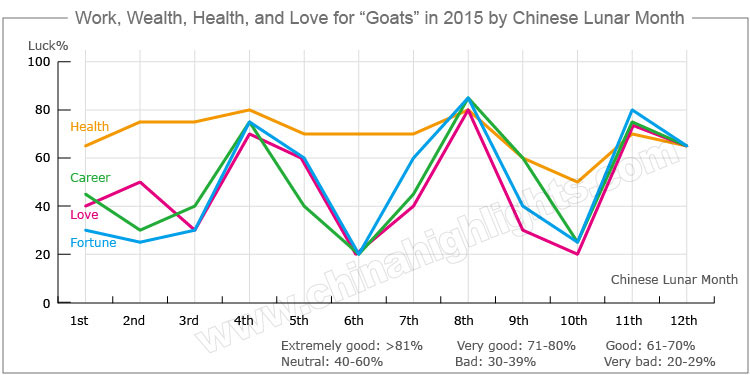 2015 is a benmingnian (本命年 /bnn-ming-nyen/ ‘origin life year’ or zodiac year corresponding to one’s birth year) for people born in a year of the Goat. In Chinese culture, a year of one’s birth sign is unlucky.

Love and relationships: Married Goats will get along well with their spouses and will enhance their relationships through daily quarrels.

Single Goats will find their lifelong love under the guidance of elders, however they should show more care for their partners in order to avoid family disputes.

The propensity for good fortune will not be very good for those born in a year of the Goat, and they will easily become involved in financial difficulties. Therefore, they should adopt conservative strategies when dealing with investments. They should try their best to increase their income, decrease their expenditure, and live within their means. Lottery fans should restrain themselves from gambling too much in order to avoid big losses.

How to Make Your Career Path Smoother in 2015?

People born in a year of the Goat generally have a smooth career, and will readily get help from wealthy beneficiaries. They usually be able to avoid adverse situations. Many opportunities for promotion, cooperation, and investment await them. However, they should deal with problems concerning their partners properly to avoid acrimony.

In 2015 Goats will tend to have good health, although they will suffer from slight illnesses occasionally, such as headaches. They should prepare some medicine before traveling very far, especially at a turn of the seasons. They should watch their diets, get sufficient rest, and do more exercise in order to boost their body’s resistance against diseases. 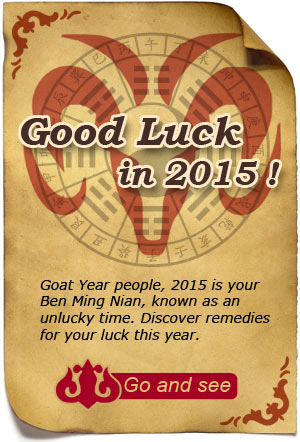 Love Compatibility: Is She/He Compatible with You?

Best with: Rabbit, Horse or Pig

Is it a Good Year to Give Birth to a Baby?

Therefore many Chinese couples take steps to avoid having children in a year of the Goat. Many young Chinese couples have been trying desperately to conceive, racing against time to have a baby in the 2014 year of the Horse, which is considered far luckier than a Goat year.

Although this is an outdated superstition which seems silly, it has a real effect on Chinese society.

In Chinese element theory, each zodiac sign is associated with one of five elements: gold (metal), wood, water, fire, or earth, which means that e.g. a Wood Goat comes in a 60-year cycle.

It is theorized that a person’s characteristics are decided by their birth year’s zodiac animal sign and element. So there are five types of Goats, each with different characteristics:

Is It the Year of the Sheep, Goat, or Ram?

Actually, Chinese people are also not quite sure about that. In Chinese the word 羊 (yáng) is a generic term, and can refer to a sheep (绵羊), goat (山羊), ram/buck (公羊 male sheep or goat), 羚羊 (antelope), etc. There is a lack of clear definition on the zodiac “Goat” in Chinese history.

However, most Chinese people and experts on folklore believe that the Chinese zodiac animal is the Goat, not the Sheep, and they have some evidence to support their idea…

Firstly, the Chinese zodiac is an invention of the Han Nationality, and goats were widely raised by the Han people (unlike sheep), so the zodiac animal is more likely to refer to a goat.

Thirdly, the Goat was one of the 12 bronze statues of the Chinese zodiac at the Old Summer Palace. Although its head was lost, its present reproduction according to historical records is the image of a goat.